How to behave with the Grepos 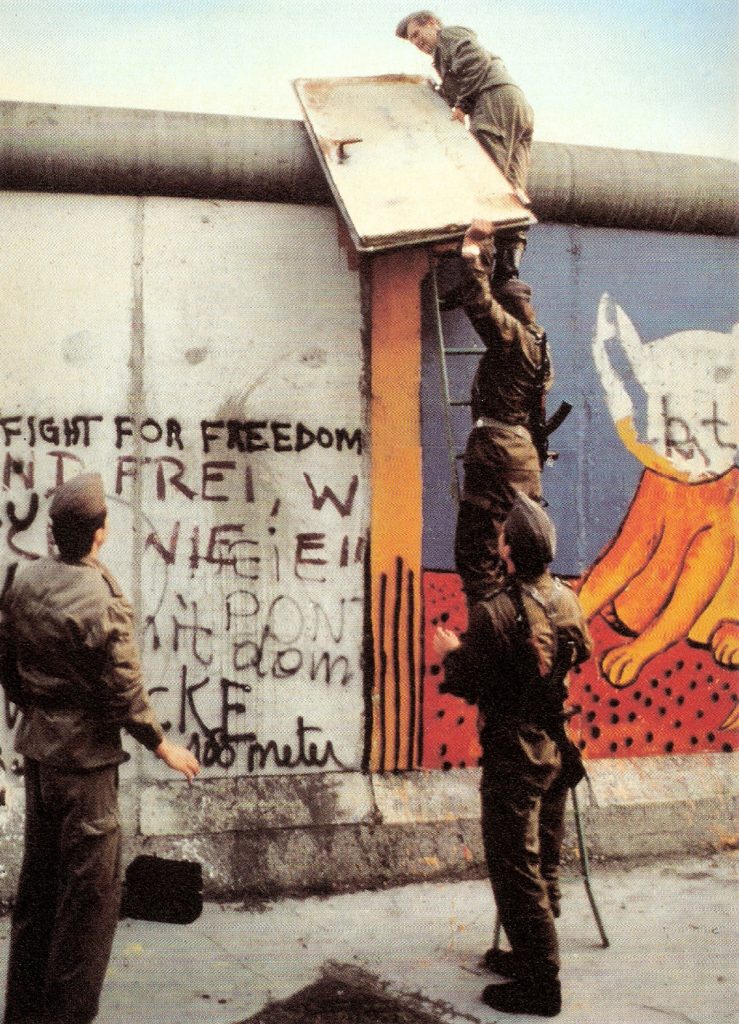 Indeed, built approximately 5 meters away from the real frontier which divided the city, the wall between East and West-Berlin could be crossed by East German border patrol who were allowed to go from one side to the other. Day and night this patrol was guarding the wall. In May the 16th, 1984, Thierry Noir and Christophe Bouchet planned to fix a metal door on the wall with screws and ankles. An old cellar door, abandoned not far from the wall, along the street Bethaniendamm in Berlin-Kreuzberg.

It’s place on the wall was already there, between the two large yellow sphinxes the two French artists had painted the week before. It was to symbolize the door of paradise. So heavy was that door that it took four people to carry it to its location. A team of the West Berlin Television (SFB) were to come around 5.30 AM in order to conclude a report about the Berlin nights and film the two artists at daybreak as they were painting the wall and fixing their famous door of paradise. All had been set up and was ready for the shooting. Already, a hundred meters of the Berlin Wall had been painted by Noir and Bouchet. A few days earlier they had displayed next to the street Bethaniendamm a hand basin, a pair of shoes and a urinal. A homage to Marcel Duchamp’s 1917 New York exhibition and the enormous scandal provoked by him exhibiting a urinal which he insisted on displaying as a fountain. The same year, 1984, the painting on the wall had started, on a late full moon April night.

To light the installation of the door, the SFB team had set large halogen lamps. An electric drilling machine was also in action, piercing four holes into the concrete. The act was almost finished when someone from the TV team suddenly shouted. “Attention everyone, stop everything!”. Indeed, over the top of the wall one could see the head of a GDR soldier looking across. Straight away the TV team decided to stop shooting and the two painters started to clean and sort their brushes out, getting ready to carry them with ladders and drilling machine, back to their atelier. The TV crew had already left when four soldiers using an iron ladder climbed over the wall, sat for a short while at the top and then climbed down to the west side in order to inspect the “damages”. Two of them carried machine-guns while a third, the chief, gave orders to a fourth. A photographer was also there, taking pictures of the paintings and objects that had been already fixed on the wall.

Back to “Georg von Rauch Haus” Youth Center where Noir and Bouchet lived, one could see out of the windows the no mans land behind the wall where the border patrol was starting to spread out an impressive selection of vehicles. The Youth Center was just 10 meters away from the wall. Also living at the youth center was a photographer from Paris, Michel Folco who worked for the French monthly magazine “Actuel”. Awakened, he also started to take pictures of the soldiers, the surreal situation. One could see the 2 photographers taking photographs of each other over the virtual border along the pavement of Bethaniendamm. The two cameras 20 cm apart from one another. A pure non-sense, at 6 o’clock in the morning. Was this to be the start of an East-West conflict, or even the beginning of a flash war? Fortunately the conflict remained local and the flashes remained camera flashes.

The soldiers took away Noir and Bouchet’s objects and sorrowfully carried them over the top of the wall. The metal door was particularly difficult to raise and remained for a while at the top, hesitantly balancing: East? West? East?? Finally, in an enormous crash, it fell back down to the East. For Noir and Bouchet that was an obvious signal, there was no necessity to paint during the night anymore.

From this day on the painters of the wall became known by the GDR, as well as Noir and Bouchet who now knew how to behave in the event of any danger: Never to paint alone nor next to doors and always be surrounded by witnesses. While taking the pictures, Michel Folco slipped on an object lying on the ground and hurt his leg.

Because of this wound he had to remain in hospital for 6 months. Noir and Bouchet were not allowed to visit GDR or even East Berlin until the fall of the wall. It was quite an expensive price to pay, but this day will remain anyway in the history of art as “A homage to Marcel Duchamp on the Berlin Wall”.